To share your memory on the wall of Barry Renson, sign in using one of the following options:

Born on December 29, 1947 in Abington, Montgomery County, he was a son of the late Joseph and Ethel (Schramm) Renson.

On February 7, 1970, he married his surviving wife, Carla M. (Miller) Renson with whom he was blessed to share over 51 years of marriage.

In addition to his wife, he is survived by his three daughters, Stephanie A. Miller and her husband Keith of Levittown, Nicole A. Renson and her fiancé Bill Fox of Mifflintown, and Lanette S. Renson and her fiancé Mike Smith of Feasterville; seven grandchildren, Tiffiny Hires and her husband Russ, Kyle-Ann Miller, Austin Gifford, Evan Gifford, Jayden Smith, Erika Long, and Lexi Smith; one great grandson, Robert Renson; two sisters, Beverly Hague of Richmond, VA and Ruth Crossley and her husband Robert of Parkland, PA; his father and mother in law, Carl and Mildred Miller; and many nieces and nephews.

In addition to his parents, he was preceded in death by a granddaughter, Samantha Lynn Renson; and one brother, Joseph Renson.

Mr. Renson was employed and retired as an Assistant Supervisor at Middletown Twp. Highway Department in Levittown after more than 39 years of service.

He was a member and attended the Free Spring Church of the Brethren, Mifflintown

His hobbies included fishing, hunting in earlier life, cooking with unique ingredients, computer games, playing the slot machines at Harrah’s, and sitting in his chair while he watched the wildlife, especially birds and deer.

He will be remembered for his sarcastic wit, dry humor, and his love for his family.

Funeral Services will be held at 11:30 AM on Friday, July 23, 2021 from the Brown Funeral Homes, Inc., 111 Westfall St., McAlisterville with Pastor Terry Smith officiating where full military burial honors will be accorded by the Juniata County Veteran’s Council. Interment will be private.

A Viewing will be held from 10:00 AM until the time of the funeral services at 11:30 AM on Friday at the funeral home.

To send flowers to the family or plant a tree in memory of Barry A. Renson, please visit our Heartfelt Sympathies Store.

We encourage you to share your most beloved memories of Barry here, so that the family and other loved ones can always see it. You can upload cherished photographs, or share your favorite stories, and can even comment on those shared by others. 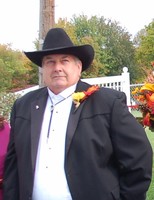