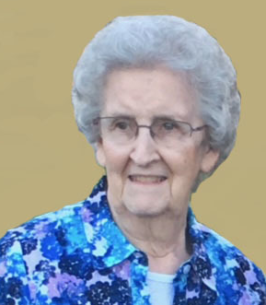 On April 4, 1959, she was married to her late husband, Roy S. Roush with whom she was blessed to share over 60 years of marriage before his passing on September 25, 2019.

She is survived by two sons, Steven A. Roush and Douglas L. Roush and his wife Holly, all of Thompsontown; five grandchildren, Christopher Roush, Chester Roush and his companion Alyvia Elliot, Logan Roush, Jessica Lehman and her husband Jordan, and Jason Roush; two great granddaughters, Kylie S. Roush and Eliana Lehman; two siblings, Naomi Baxter of Leola and Charles Swartz of Hummelstown; and many nieces and nephews.

In addition to her parents and husband, she was preceded in death by one brother, Robert Swartz and one daughter in law, Suzanne Roush.

Mrs. Roush had attended Otterbein United Methodist Church in East Salem and had helped with fundraising activities with Delaware Twp. Fire Company No. 6.

She enjoyed flowers, tending to her garden, and crocheting afghans; however, she cherished the time spent with her family, especially her grandchildren.

All Services will be private with the Rev. Donald Walters officiating. Interment will take place at East Salem Cemetery.

In lieu of flowers, memorial contributions in Mrs. Roush’s memory may be made to the Otterbein United Methodist Church, 7398 Route 235, Mifflintown, PA 17059.