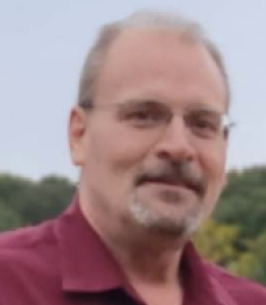 Parrish P. “Perry” Shellenberger, 52, of Thompsontown passed away on Sunday, October 16, 2022 at his residence.

Born on December 10, 1969 in Lewistown, Mifflin County, he is a son of Donald E. and Gail A. (Shilling) Shellenberger of McAlisterville.

On July 15, 1989, he married the love of his life, Christina A. (Kepner) Shellenberger, with whom he was blessed to share over 33 years of marriage before his passing.

He was preceded in death by one sister, Paula Bowersox; one brother in law, Mark Clukey Sr.; his father in law, Dennis Kepner; and one nephew, Joshua Bowersox.

Perry was a 1987 graduate of Juniata High School in Mifflintown and a 1989 graduate of Lincoln Tech in Allentown.

Earlier in life, he was the Timer at Port Royal Speedway until he took the role of Treasurer of the Juniata County Agricultural Society. He was previously employed at Blue Valley Industries of Port Royal for over 30 years where he had many roles including Draftsman and Vice President and had previously served as a member of the Walker Township Rec Board.

Perry enjoyed racing, poker, coaching his girls in softball, deer camp, and his yearly trips to Watkins Glen, but most importantly, he cherished the time spent with his girls and granddaughter.

Funeral Services will be held at 10:00 AM on Tuesday, October 25, 2022 at the Oakland Mills Evangelical Methodist Church, 148 Leonard Road, Oakland Mills with the Rev. Nathanael Mowery officiating. Interment will be private.

In lieu of flowers, memorial contributions can be made in Mr. Shellenberger’s memory to the Shellenberger Family, 1308 Jonestown Road, Thompsontown, PA 17094.