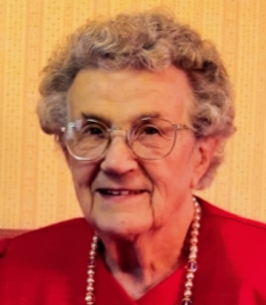 Elsie Mae Benner, 96, formerly of McAlisterville, entered into eternity at 8:00 AM on Tuesday, October 11, 2022 at the Bridges at Brookline, Mifflintown.

Born on September 22, 1926 in Delaware Twp., Juniata County, she was a daughter of the late Charles and Tessie (Brubaker) Hart.

In April 1943, she was married to her surviving husband, Lawrence L. Benner, with whom she was blessed to share over 79 years of marriage before her passing.

Elsie Mae was an active member of her church, Bunkertown Brethren Church, where, in the past, served along with her husband as a Deacon and was an Adult Sunday School Teacher. She also helped with the Quilting Ladies of her church for years and made many beautiful quilts in her home.

Mrs. Benner was an avid reader and also loved to read her Bible every day.

A funeral service will be held at 2:00 PM on Friday, October 14, 2022 at the Bunkertown Brethren Church, 52 Bunkertown Road, McAlisterville with her Pastor’s Wes Stahl and Steve Osenga officiating. Interment will follow in the Goodwill Cemetery, Bunkertown.

A viewing will be held from 1:00 PM until the time of the funeral services at 2:00 PM on Friday at the church.

In lieu of flowers, memorial contributions in Mrs. Benner’s memory can be made to the Bunkertown Brethren Church. 52 Bunkertown Road, McAlisterville, PA 17049 or to the Samaritans Purse, P.O. Box 3000, Boone, NX 28607.