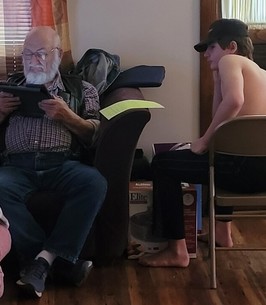 On August 17, 1959, he married his surviving wife, Mary S. (Leahy) Wheeler with whom he was blessed to share over 63 years of marriage before his passing.

In addition to his wife, he is survived by a daughter, Lou Anne Sheaffer and her husband Jeff, a brother, Jack Wheeler, all of Port Royal, and six grandchildren and eight great grandchildren.

In addition to his parents, he was preceded in death by a daughter, Brenda Y. Oberlin and his oldest brother, William Wheeler.

He was a 1958 graduate of Lewistown High School and in 1984, he retired as a Truck Driver from various local trucking companies.

Funeral Services will be held at 10:00 AM, Thursday, September 29, 2022 at the Brown Funeral Homes, Inc., 100 Bridge St., Mifflintown with the Rev. Frank J. Swartz officiating. Interment will follow at Union Memorial Gardens, Mifflintown.

In lieu of flowers, memorial contributions in Mr. Wheeler’s memory can be made to the Juniata County Historical Society, 498 Jefferson St., Suite B, Mifflintown, PA 17059.