To share your memory on the wall of Emory Zimmerman, sign in using one of the following options:

He is survived by: two daughters, Connie L. Zitsch of Enola and Cathy A. Craig and her husband Christopher of Halifax; a companion, Linda L. Harman of McCoysville; five grandchildren, Justin Zitsch and his wife Emily, Heather Wiest, Christy Zitsch, Brandon Craig and wife Samantha, and Michael Zitsch; seven great grandchildren, Emory, Hayden, Kahleigh, Aryah, Zoe, Zane, and Braxton; and he his survived by his four legged feline friend, Tommy.

Mr. Zimmerman was a 1961 graduate of Chief Logan High School, a Methodist faith, and had attended the Cornerstone Community Church in Mexico.

He retired with 30 years of service as a Truck Driver for Roadway Express of Carlisle and was a farmer, owning and operating the Circle Z Farm of McCoysville.

Emory loved the outdoors, farming, hunting, butchering, traveling, and taking care of all of his pets; however, his family was most important to him.

All Services will be private with the Rev. Donna Christopher officiating. Interment will take place at McCoysville Cemetery.

In lieu of flowers, memorial contributions in Mr. Zimmerman’s memory may be made to Geisinger Hospice, 106 Derry Heights Blvd., Suite 302, Lewistown, PA 17044.

Arrangements have been entrusted to the Brown Funeral Homes, Inc., 100 Bridge St, Mifflintown.

To send flowers to the family or plant a tree in memory of Emory W. Zimmerman, please visit our Heartfelt Sympathies Store.

Print
All Services will be Private.

We encourage you to share your most beloved memories of Emory here, so that the family and other loved ones can always see it. You can upload cherished photographs, or share your favorite stories, and can even comment on those shared by others. 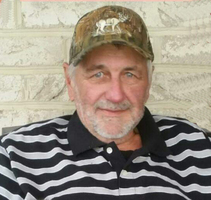 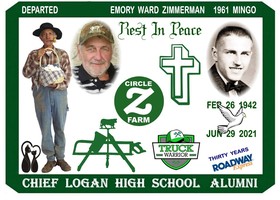