To share your memory on the wall of Steward Ellis, sign in using one of the following options:

Born on March 18, 1938 in Mifflintown, Juniata County, he was a son of the late Steward A. and Kathryn N. (Watts) Ellis.

Born on March 18, 1938 in Mifflintown, Juniata County, he was a son of the late Steward A. and Kathryn N. (Watts) Ellis.

On October 28, 1967, he married his surviving wife, Kristan (Hackenson) Ellis with whom he was blessed to share over 53 years of marriage.

In addition to his parents, he was preceded in death by his son, Mark A. Ellis and three sisters, Mary Elizabeth Arnold, Roberta J. Ellis, and Esther Rhine.

Mr. Ellis was a 1956 graduate of Juniata Joint High School in Mifflintown and a graduate of Thompson Institute in Harrisburg.

He was employed by the Municipal Authority of the Borough of Lewistown, retiring as the Office Manager after 43 years of service in 2003 .

His memberships included the First United Methodist Church in Lewistown, the Lewistown Elks Lodge #663 BPOE, and the American Water Association.

Steward enjoyed traveling to Europe and the Jersey Shore; however, he cherished the time spent with his family, especially his grandchildren and great grandchildren.

All Services will be private with interment taking place at Westminster Presbyterian Cemetery in Mifflintown.

In lieu of flowers, memorial contributions in Mr. Ellis’ memory can be made to the First United Methodist Church, 200 E. Third St., Lewistown, PA 17044.

To send flowers to the family or plant a tree in memory of Steward A. Ellis Jr., please visit our Heartfelt Sympathies Store.

We encourage you to share your most beloved memories of Steward here, so that the family and other loved ones can always see it. You can upload cherished photographs, or share your favorite stories, and can even comment on those shared by others.

Posted May 05, 2021 at 11:05pm
Always remember "Bugs" as I was growing up in Mifflintown. Many years later my husband Roy and I would meet them quite often out eating. Always had a good time and enjoyed talking with him. Our sympathy to Kris and the family.
Comment Share
Share via:
B

Posted May 05, 2021 at 04:33pm
To the family , So sorry to read about Bugs passing . That is what I remember calling him back in the day . Sorry I had to add all the pictures but that is how I grouped them . It was at a pig butching at Darwin & Anne Auker farm (my parents ) . As you see that is Mark , Tammy , Terry enjoying a meal . Jane Fleisher with Aunt Mary next picture , There is Bugs with the guys enjoying there meal after working hard . The colored pictures are my Uncle Henry , Cousin Shirley , Aunt Rebecca , then Uncle John , Aunt Martha they daughter Jean & husband Max . Sorry for all the information on the pictures . Hope remember the good times will help you through these days and more to come . May God Bless. Lois Crissman 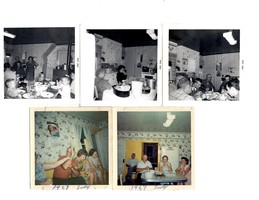