To share your memory on the wall of Sara Walters, sign in using one of the following options:

Born on November 29, 1925 in Mifflintown, Juniata County, she was a daughter of the late Nestor K. and Edith A. (Pennington) Ebright. On April 9, 1948, she married her late husband, Warren W. “Dutch” Walters with whom she was blessed to share more than 68 years of marriage before his passing on July 14, 2016.

In addition to her parents and husband, she was preceded in death by one brother, William N. Ebright and one sister, Esther E. Dunkleberger.

Kitty was a 1944 graduate of Juniata Joint High School in Mifflintown.

In her teenage years, she worked at Milliken’s Restaurant and ran the snack bar at Dick Harry’s Bowling Alley. She was also formerly employed as the Head Cook at Walker Elementary School in Mifflintown and, along with her husband, were the custodians of Juniata Valley Bank in Port Royal and the Messiah Lutheran Church for over 30 years.

Her memberships included Messiah Lutheran Church in Mifflintown where she taught Sunday School, served as a Junior Church Choir Director, participated in the Church Choir, belonged to the Needler’s of Messiah Lutheran Church, and was a Director of Vacation Bible School; was the former director of the Mifflin Senior Citizens Center; member of the Friends of Locust Grove Retirement Center; was a Past Matron of the Order of the Eastern Star, Chapter 260 of Mifflintown and was a Past Mother Advisor of the Rainbow Girls.

The family would like to thank Jimmy and Patty Walters, Kitty’s former caregivers Judy Smith and Valerie Dalton, and the staff and nurses of UPMC Hospice Care.

The family will provide all funeral flowers and kindly suggests contributions in Kitty’s memory be made to the Messiah Lutheran Church, 3 S. Third Street, Mifflintown, PA 17059.

Online condolences may be extended to the family at www.brownfuneralhomesinc.com
Read Less

To send flowers to the family or plant a tree in memory of Sara K. "Kitty" Walters, please visit our Heartfelt Sympathies Store.

We encourage you to share your most beloved memories of Sara here, so that the family and other loved ones can always see it. You can upload cherished photographs, or share your favorite stories, and can even comment on those shared by others.

Posted Apr 05, 2021 at 11:41am
My sincere and deepest sympathies to Debbie, Cyndi and the family for the loss of Kitty. She was one of the sweetest persons I ever knew with a generous heart , warm soul and a never ending smile for everyone she met. While she now dines at the Lord's table with her beloved Dutch, may God give her family comfort and peace during this difficult time.
Comment Share
Share via: 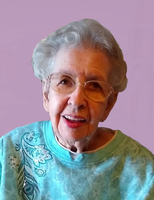