To share your memory on the wall of Esther Rhine, sign in using one of the following options:

Print
All services will be at the convenience of the family.

We encourage you to share your most beloved memories of Esther here, so that the family and other loved ones can always see it. You can upload cherished photographs, or share your favorite stories, and can even comment on those shared by others.

Posted Jan 29, 2021 at 11:38am
My deepest condolences to all of the family. Essie and Gene were two of my favorite Red Zone customers. Such kind, warm hearted people. You are all in my thoughts and prayers. Essie’s smile brightened any room and I will miss her.
Comment Share
Share via:

Posted Jan 23, 2021 at 03:05pm
So many great memories of times with Aunt Essie, Uncle Gene, and so many other family members.
Comment Share
Share via:
CW

I met Essie at Locust Grove when she was roommates with my daughter Kim Finkerbiner Very sweet lady Enjoyed talking to her and her daughters. 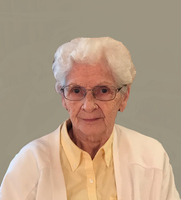