To share your memory on the wall of Herbert Nace, sign in using one of the following options:

Print
Herbert R. “Herb” Nace, 92, of McAlisterville, passed into the arms of Jesus at 11:04 PM on Saturday, January 16, 2021 at his residence surrounded by his family.

On September 13, 1950 in Hagerstown, MD, he married his late wife, Cora Edith (Ehrenzeller) Nace with whom he was blessed to share over 69 years of marriage before her passing on November 24, 2019.

In addition to his parents and wife, he was preceded in death by a son, Jim Nace on November 11, 2009 and eight siblings, Clair Nace, Pauline Lauver, George Nace, Palmer Nace, Roy Nace, Harold Nace, Clarice Varner, and Maybelle June Lauver.

Herb grew up working on his family’s farm, Cherry Hill Poultry Farm, where he was involved in the hatching of chicks that were delivered to the farms in the area as well as sending them by train to distant locations. He also assisted his brothers on egg routes for both selling and picking up eggs. Next, he worked full time for Maple Lawn, most involved with farming and working in the orchard until 1981 after which, he then was employed and retired from the Selinsgrove Center in 1989.

Mr. Nace honorably served our country in the U.S. Army during the Korean War.

His family will be remembered in the Richfield area for having the first “public” swimming pond in the area which was enjoyed by families and teenagers from all around.

In earlier life, he was a crew member of the Regester Racing Team #6 for drivers Dick Tobias and Mitch Smith who drove at Port Royal Speedway. He was very passionate about dirt track racing, especially sprint cars and was proud to have followed and participated in his late son, Jim Nace’s racing career.

His hobbies included hunting and checking the bear stations on opening day, tinkering with things using his mechanical skills and later getting involved in woodworking. He also enjoyed following his grandchildren’s activities and sporting events.

His presence will be missed at the County Line Restaurant in Richfield, the Corner Deli in Thompsontown, and at the Evendale Garage where he could be found in the mornings and sometimes in the afternoons too where he would meet up with friends to chat.

He will be remembered for having the most well kept lawn, sometimes mowing at least every other day and plowing snow as soon as the ground turned white.

The Nace family would like to extend a very special thank you to Herb’s Care Team which included Jalene, Emily, Carol, Pam, Jodie, and others from the agency for their care and compassion.

Public Graveside Services will be held at 11:00 AM on Saturday, January 23, 2021 at the East Salem Cemetery with Pastor Kevin Brophy officiating.

To send flowers to the family or plant a tree in memory of Herbert R. "Herb" Nace, please visit our Heartfelt Sympathies Store.

We encourage you to share your most beloved memories of Herbert here, so that the family and other loved ones can always see it. You can upload cherished photographs, or share your favorite stories, and can even comment on those shared by others. 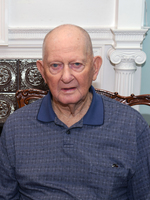