To share your memory on the wall of Sallie Miller, sign in using one of the following options:

To plant a memorial tree in honor of Sallie A. Miller, please visit our Heartfelt Sympathies Store.

Print
All services will be held at a later in the spring.

We encourage you to share your most beloved memories of Sallie here, so that the family and other loved ones can always see it. You can upload cherished photographs, or share your favorite stories, and can even comment on those shared by others.

Posted Jan 11, 2021 at 10:00am
So sorry for your loss 😢 Sally will always be remembered by her pie making and her beautiful smile 💖
Comment Share
Share via:
WW

Posted Jan 04, 2021 at 03:54pm
Ray and family, I offer my condolences. Ray, I know how hard it is to have a loved one with alzheimers disease and on top of that to be isolated in a nursing home. You are in my thoughts and prayers. In Christ, your neighbor,
Larry
Comment Share
Share via: 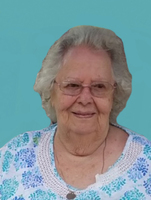